Collapse Now And Avoid The Rush...

The Long Descent of Our Modern Civilization Has Begun. Are You Ready?

No Till/ No Dig Gardening/Charles Dowding

I stumbled across Charles Dowding recently and wanted to pass this along in case people like watching YouTube gardening videos. I could watch them all day but YMMV. Watching these videos has been both educational and relaxing. (I told my husband he's like the Bob Ross of Gardening).

I've been doing a version of No Dig in my own home garden for years but in watching these videos I've definitely realized how to up my efficiency and production next season. I already started mutli-sowing my winter greens with good results and was like "Why didn't I do this before?! Easy way to 3-4x production.

If this is your thing - enjoy!

Let us know how your winter garden fares...

... and where you live. I just read about winter greens gardening, and also early starting of other crops (e.g., carrots and onions). Caleb Warnock has published "Backyard Winter Gardening", which I assume expands on a chapter in his book that I actually have: "More Forgotten Skills of Self-Reliance". (He's also enthusiastic about seed-saving, btw.) However, he's gardening in Utah, and I'm in central Maryland.

The USDA plant hardiness map seems to think I am in zone 7b which is an *average* lowest low of 5-10F. A couple of decades here of observation is consistent with zone 8a which is 10-15F. The late December cold snap that the media made such a fuss about produced a low of 6F here for a couple of days in a row. For plant impact, duration of low is also important. I had a stretch of 23 hours out of a 27 hour period where it was below 10F. I believe that is the longest period of sub 10F I have had gardening in this location. The picture attached shows my Kale on the right and Leeks on the left. Pretty much all of the Kale foliage was killed but the lower portion of some of the Leek leaves seem to have survived. Following the cold snap I have been having above average temperatures with the 10 day forecast showing no overnight freezes. I figured if either of these have a chance of pulling through they will do it soon. Sure enough, this morning I can see a tiny bit of new green foliage in the crowns of the Kale and a few new leaves emerging from the Leeks.
The Kale variety is Dwarf Blue Scotch and the Leeks Bleu de Solaize. 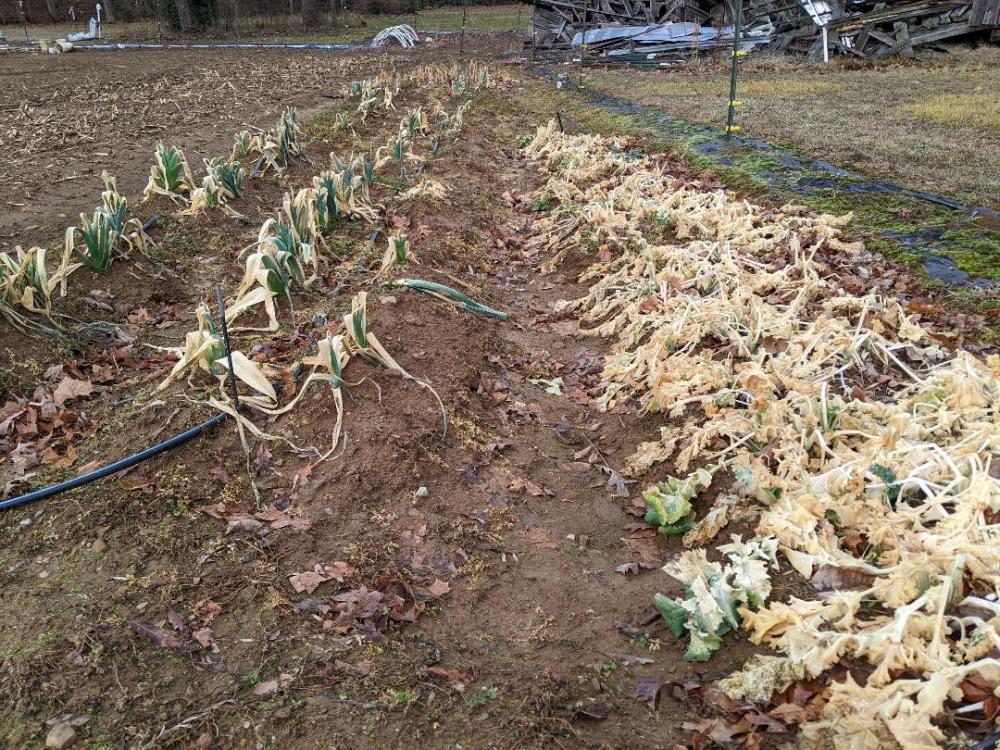 My experiment on cold hardy growing and microgreens. I’m zone 5b but it’s 40F
and raining here in January so a very mild winter so far.
We have had deep freeze but it keeps warming up.

Multisowing ala Charles Dowding is going well. Everywhere the plants survived,
they are fine with their plant buddies. Faster than planting in rows and spacing out,
no downside in my limited experiment so far,
Although you can’t seem to kill kale so it has yet to be seen with other plants.

Kale vs Chard. Definitely kale. The chard outdoors died in the cold snap,
kale was unfazed. Indoor chard is weak, kale just keeps chugging along no matter how I treat it.

In October, I started seeds for Lacinato Kale, Red Russian Kale and Rainbow Chard.
I put some in a caterpillar tunnel in the garden, some in an overturned clear plastic
storage container on the backporch to simulate a small greenhouse, and then some indoors.

The caterpillar tunnel is the clear winner. I looked at it for the first time since October yesterday
and the kale is alive, hardy, and growing slowly. If I had planted a lot,
I would have harvested baby greens. As it is, I’ll wait until it gets some size on it in a few months
and eat it then. I’m definitely going to do this again next winter in volume. If it’s warm, baby greens
in January. If it’s cold, a big harvest of greens in early spring. Although I definitely note that I
had to batten down the hatches to keep the critters out. I weighed every inch of every side down
with firewood so no one could get in.

The faux greenhouse is ok. I put the seedlings in black nursery pots and left a jug of water in there
in an attempt to keep the heat up. It was not enough for the chard. Kale is hardy but small.
I did realize I have to water it though which is too much work. I prefer the set it and forget it caterpillar tunnel kale.

The indoor plants I forgot about during the holidays and they got weak and leggy.
They were simply by a southern facing window. I potted them up and started giving them
a little extra light. The kale recovered, the chard is limping along. Not enough to harvest for baby greens
so far, takes up too much window space for the benefit.

Microgreens are a success for me. Over the summer I built a fancy new stand! I bought this off
Craigslist and painted it. ($50). It is a nice, quality stand, Pottery Barn or some such fancy store,
and keeps the cat out.

The one thing I always hated about microgreens vs sprouts was the plastic trays.
So I decided to try with some crystal I bought at the thrift store ($18 total). I thought the lack of drainage
might be a problem but no, they just don’t stop growing. Sometimes, they greens will droop a little
from lack of water, so I water them and within a few hours they pop back up without fail.
Initially, I was filling the containers all the way up with potting soil, but determined I could get by on much,
much less if I was willing to have an occasional droopy set of greens to rewater.

We are getting more than we can eat at this point with a small family. I do nothing for lights,
just a southern facing window. Yes, they can get leggy but they taste the same. I will give them a 180degree
turn every few days to even them up. I also find them lower maintenance than sprouts.
I do a quick mist once a day for new starts but when harvesting, I don’t have to spin for the seed casings
in a salad spinner. It’s also prettier to have a plant growing in winter vs a jar of sprouts imo.

I bought a bunch of seeds from True Leaf Market online and have been happy with those.
Pea shoots are definitely the one to go to for a beginner or small growing setup. Fast, easy, lots of greens.
I’m also very happy with radishes, parsley, broccoli, and generic salad mix.
The one I haven’t loved is nasturtium, it’s slow and a bit fussy with water levels.
I prefer sunflower microgreens vs sprouts because then I don’t have to fool around with cleaning the seed casings off.

A few of my containers came with lids. I use those as humidity domes for older seeds or
smaller seeds like parsley. Other than that, I have seen no problems in not using humidity domes
on others, just the daily mist of water.

I’m so happy with the microgreens. My next step is to figure out the best mix to get optimal nutrition
through the winter that is easy and low maintenance. I should also mention my Malabar Spinach plant at this time
. I couldn’t have treated this plant worse over the last few years and it keeps going. I believe it is also a
good source of Omegas. So I should upgrade my treatment of it! I started seeds a few years ago
in a summer warm spell. I keep outdoors in the hottest part of the back porch in summer
, and in the winter I bring it and leave it in a southern window. I harvest lightly but it loves it and keeps getting bigger.

I’m still optimizing my fancy growing vessels and getting bigger ones when I see them.
I’d like to get more big casseroles like on the top shelf and when I have chickens again
I can sprout food for them in the winter on the bottom shelf. 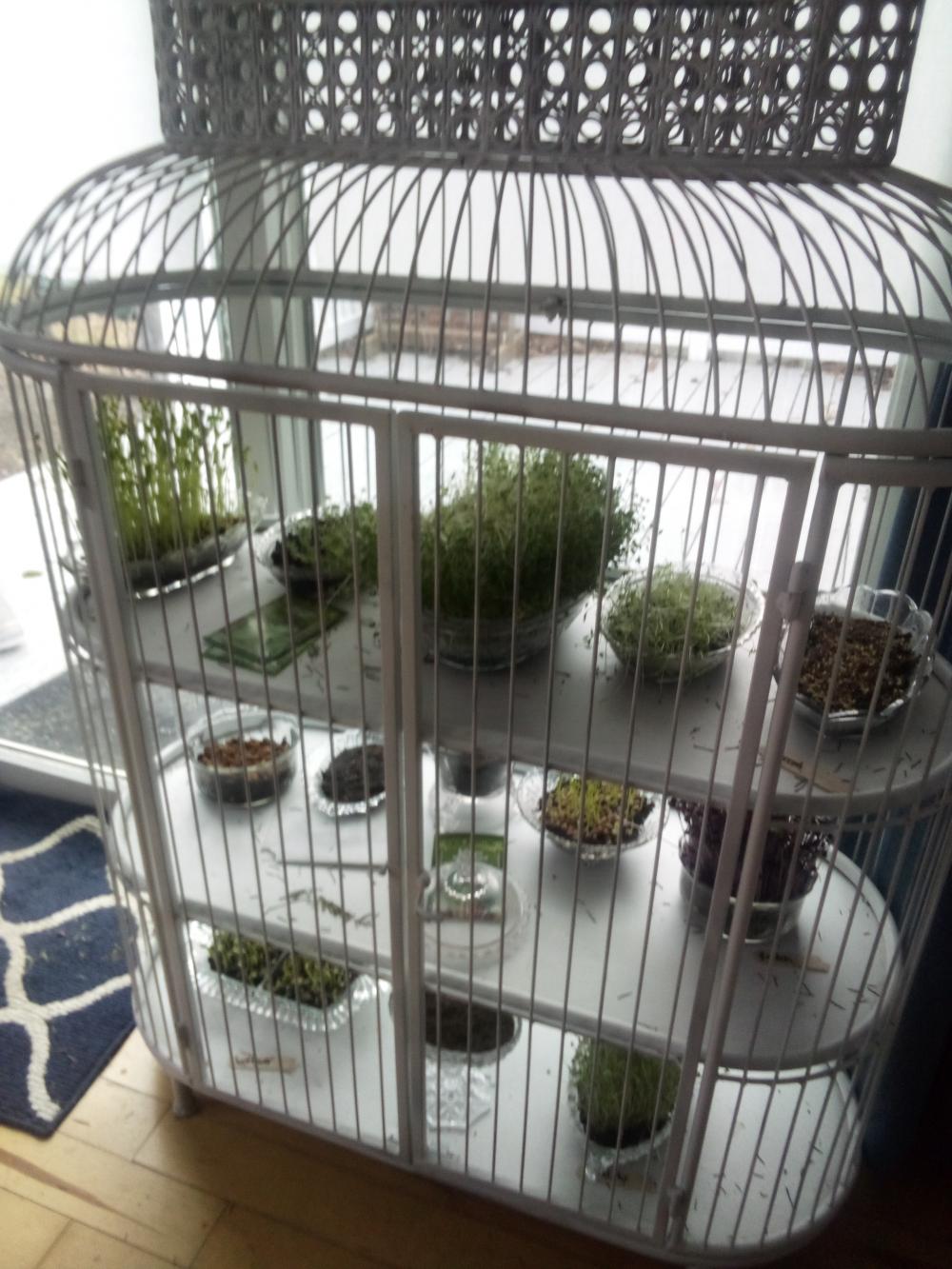 END_OF_DOCUMENT_TOKEN_TO_BE_REPLACED

There are currently 0 users online.

Disclaimer: All Published Content on this website is my responsibility and as such if it pisses you off and you don't like it, contact me to bitch. While this site is dedicated to the teaching and writings of John Michael Greer, he maintains no oversight or approval of anything posted here. We're a fan sight. While we recommend you buy his books and read his writing, if we run afoul of any legal or regulatory statutes, its on me alone. Well, forum posts are the person posting the information's responsibility. If you object to what we are saying, I recommend you take a moment to read the history of the First Amendment. Just because what someone says offends you, doesn't make it illegal. Or get an account and argue your point on our forums.We will read you even if we think you're wrong. Maybe you'll change our minds or we will change yours. Either way, times are about to get rough and if you don't accept that, you are in the way. Get out of it now, we're trying to save the Human Race here!

Per California Consumer Privacy Act, we do not sell any of your personal data and only store your email address for your log in.